With the spread of COVID-19, Chem-Dry cares about the health of our customers, employees & community.   Learn More
We apply a hospital grade sanitizer to all equipment before entering your home. Check out our Sanitizer & Protectant Packages

The Importance of a Healthy Home

We all want to live in a safe environment, to keep ourselves and our families healthy. But to be able to maintain a healthy home, you need to be armed with the facts so you know what you’re up against and what to do about it.

For instance, did you know that…

Allergens aren’t the only challenge we face in maintaining a healthy home. Bacteria is another obstacle in our path. It’s been reported that 7 pathogens or types of bacteria – not hundreds or thousands – cause 90% of illnesses, hospitalizations and deaths. [2]

Do Carpets Help or Hurt?

One little known fact is that carpets, rugs and upholstery act as air filters in the home, trapping allergens and bacteria that would otherwise circulate more freely. These soft furnishings are our healthy allies – sort of unsung heroes – in our home.

However, periodic deep cleaning of these carpets, rugs and upholstery is required for them to remain optimally effective in their mission of capturing and holding unhealthy particles.

There are other surfaces where allergens and bacteria can build up. Over time, dirt, grime and allergens build up in the porous surfaces of your stone, tile and grout flooring and even granite countertops, which can lead to bacteria growth.

How About Our Beloved Pets?

We love them and they’re a big part of our families. Although not all homes own a pet, one study found that 100% of homes in the U.S. have detectable levels of dog and cat dander. [1] However it got there, on clothes or footwear or some other way, pet dander is everywhere. And what’s even more shocking is the level of pet dander in many homes:

The Asthma and Allergy Foundation of America (aafa.org) defines an allergy as the reaction of your immune system to a foreign substance, called an allergen. An allergen could be something eaten, inhaled into your lungs, injected into your body or touched. Potential symptoms of an allergic reaction include coughing, sneezing, itchy eyes, a runny nose and a scratchy throat. Rashes, hives, low blood pressure, breathing trouble, asthma attacks and even death are more severe reactions to allergens.

The most common allergic reaction is called allergic rhinitis, more commonly known as hay fever. This condition is a general term used to described symptoms that affect the nose.[3] Typical symptoms include:

There are generally two types of hay fever:

How Many People are Affected by Allergies?

How Many People Get Sick from Allergies?

What is the Financial Impact of Allergies?

What Are the Types of Allergies?

The most common triggers include: tree, grass and weed pollen, mold spores, dust mites, cockroaches and dander (from cats, dogs and even rodents!). [3]

Think your bathroom is the dirtiest place in your home? Research by NSF International in 2011 showed that your kitchen actually has the most germs. NSF International asked families to swab 30 household items to measure contamination levels of the most common forms of bacteria and germs, as well as yeast and mold. Both of these are considered to be triggers for allergic reactions.

Some sobering highlights include:

It is recommended to use a quality vacuum with a High Efficiency Particulate Air (HEPA) filter weekly or at least every other week to pick up surface level dirt, dust and other unhealthy elements and to help maintain your carpet’s ability to act as an effective filter.

Periodic deep cleanings are also recommended, which can get down to the base of the carpet where much of the dirt, allergens and bacteria settle. Seek the services of a qualified professional carpet cleaning company 2-3 times per year. Educate yourself on the options. Some services like traditional steam cleaners use not only soapy water but high pressure, which can soak through to the base of the carpet backing and create a breeding ground for mold, mildew and bacteria. With typical steam cleaning, your carpets often stay wet for 2 or more days, which is also a nuisance for the family. Our cleaning services use green certified solutions without any soaps or detergents and use far less water, so carpets dry faster – within a couple of hours rather than a couple of days.

Check out our Sanitizer & Protectant Packages

See All Coupons Print
SAVE!

See All Coupons Print
SAVE! 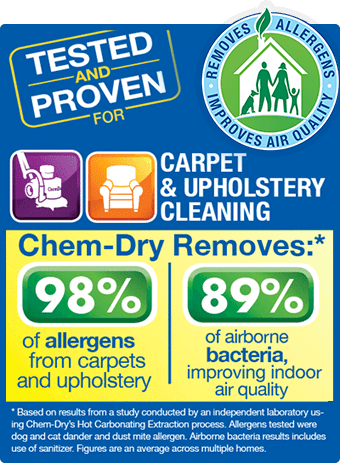 Learn more about how our core carpet cleaning solution is Green Certified.

We have partnered with Best Friends Animal Society® to help raise funds to support their network of animal shelters across the country and encourage rescue pet adoption. Read more about our Cleaning for the PAWS initiative now and learn how you can help.

Call Us Now For Your Free Cleaning Estimate